JUST ONE MONTH before the Eagles are set to perform at Savannah’s new Enmarket Arena with ticket prices starting at $450 each — for upper-level balcony seats — the Arena and the entire complex surrounding it seem nowhere near completion.

It’s not for lack of trying on the part of the actual construction workers, who are abuzz around the interior and exterior of the site. Trucks and heavy vehicles come and go from the construction site all day long.

But the facility itself, as well as the surrounding collection of temporary parking areas — some of them no more than unlit dirt lots — still needs a lot of work before it can open at even a minimal level of safety.

So much work, in fact, that the official opening of Enmarket Arena has already been delayed several weeks. Two events are postponed as of this writing: Earth Wind & Fire, from Jan. 13 to Feb. 9, and country artist Riley Green, from Jan. 14 to Feb. 6.

A week after the venue was originally set to open, it is still in a surreally unfinished state.

Saying the City “over anticipated” on the planned January 2022 opening, Savannah Mayor Van Johnson said, “COVID is real, supply chain disruptions are real, and we just could not get it done like we hoped that we would.”

Reddit of course is not a definitive source. But a poster on Reddit who claimed to be a worker there wrote on Jan. 5 that "They just did a walkthrough today. Hell there are still open walls that aren’t even sheetrocked. Fire alarm system ain’t done, hell even the doors aren’t done. I’d estimate there’s still a few months of work here at the minimum."

Take that with the grain of salt it deserves. But here's a shot taken inside the Arena on or about that particular day which illustrates the situation:

But it's not just the Arena itself that is a major issue. Parking seems especially problematic.

Though the City has known for years where the Arena would be, the pressing question of where to put all the vehicles arriving there often seemed like an afterthought.

While Enmarket Arena will eventually feature a large adjacent parking lot – 1,000 spaces for a venue with over 9,000 capacity – that lot isn’t completed yet.

In addition, ambitious road-widening projects on the main streets used to access the Arena — Gwinnett Street and Stiles Avenue — are behind schedule. The shoulders of both roads currently are unusable by either pedestrians or vehicles.

So in early January, just a couple of weeks prior to the scheduled opening, the City and the Arena management firm Oak View Group announced that patrons would have the use of a hodgepodge of 8 different lots, varying in size and distance from the facility.

You can't just show up and hope to park in those lots. It's a clunky process: You have to go online to "reserve" your space, with the actual parking being unassigned general admission. Spaces cost $15-20, a purchase you have to make on Ticketmaster separate from your show tickets.

The two largest sites offered are a parking lot in a mostly unoccupied strip mall at the intersection of Gwinnett and Stiles, and the adjacent Temple of Glory megachurch parking lot. Unlike many of the offered lots, these are fully paved.

But they are roughly a quarter-mile walk away from the Arena entrance. There are no usable sidewalks for pedestrians to use for large portions of this walk, and the promised road-widening projects are incomplete and still in progress.

Unless something changes dramatically over the next month it could be a dark and physically challenging journey on foot even for patrons with no mobility issues.

Another City-offered parking lot lies on Stiles across from that strip mall lot in the site of the former Jackson’s Garage, which was demolished to make way for the Arena. However, that lot is currently just dusty gravel, and is also about a quarter-mile walk from the Arena.

A bit closer to the Arena is a confusing mix of smaller City-offered lots, most extremely poorly lit, if lit at all, and set mostly near or inside light-industrial sites.

“Light-industrial” is itself arguable given the actually quite heavy industrial nature of the entire area. The massive Georgia Ports Ocean Terminal expansion a short distance away from the Arena brings a steady volume of large vehicles directly through the Gwinnett/Stiles intersection (though one assumes that mostly happens during daytime hours when the Arena will be unused).

One of the other "official" parking lots is an unlit, unpaved brownfield within the now mostly demolished original Oglethorpe Charter School complex on Hastings Avenue.

You’re not going to bother with parking, you say? You’d rather take an Uber or Lyft? Or maybe you’ll park in a City garage downtown and take advantage of one of the free trolley shuttles to and from the Arena offered by the City?

The planned trolley and Uber/Lyft dropoff/pickup spot is also a long walk from the Arena. It's in a dirt lot off narrow Feeley Street, a dimly lit industrial area with extremely poor cell signal reception and no sidewalks. (I get one bar with Verizon throughout the entire Arena zone.)

The scene on Feeley Street around 11 p.m. or so after a big show lets out is likely to be a confusing one. You can easily imagine a crowd of people in the dark struggling to get a signal on their phones as Uber drivers try to navigate around idling trolleys on the narrow street and in the dirt lot, with no sidewalks on either side to accommodate pedestrians.

To even get to and from the trolley/Uber spot at all, pedestrians will have to cross busy Stiles Avenue, which is currently itself a construction site due to the ongoing road-widening.

It’s all going to be quite an adventure.

Personally I hope that residents of the immediate neighborhood, many of whom are in a lower income bracket, will have the opportunity to make good money renting out what parking spaces they have to Arena customers. I also hope the City will not give them a hard time about renting out spots, and that there will be prompt towing in case patrons park in residential driveways without permission.

Indeed, given the poor lighting at most of the City-sponsored lots, renting a spot in a residential driveway might be your best option.

In any case, that neighborhood will soon experience a truly huge volume of vehicle traffic, mostly at night. The City has promised that this portion of West Savannah will be "transformed" by the Arena project. That's one promise that will definitely be kept – for better or for worse.

So if you're planning an Enmarket Arena adventure anytime soon, my advice is this:

Do not depend on your phone to have service. Though the Arena says you can use QR codes on your phone get into your “reserved” spot in those mostly-unpaved lots, my suggestion is to screenshot and/or print out anything and everything you can in advance and have it with you.

Disabled patrons should plan to be dropped off as close to the Arena entrance as possible. At this time there appears to be no way for disabled patrons to safely or comfortably access the Arena from anywhere outside the building's immediate footprint.

If you use the free trolley option from downtown, be ready for a long night. Shuttles start running from the corner of Liberty and Barnard 1.5 hours before the show starts and stop running one hour after it ends. But it seems inevitable that there will be some wait time for open shuttles on both ends of the journey.

Whichever mode of transportation you use to get to the Arena, plan ahead and budget extra time for delays which are almost certain to happen.

Please be respectful to the neighborhood by NOT trying to park in any residential driveway or lot unless you know for sure it’s being rented out to you!

And remember the Enmarket Arena does have a COVID-19 policy which includes mandatory masking inside and either proof of vaccination or a recent negative test result.

After 40 years of raising awareness about trees, the Savannah Tree Foundation is ready to take it to the next level of planning and advocacy 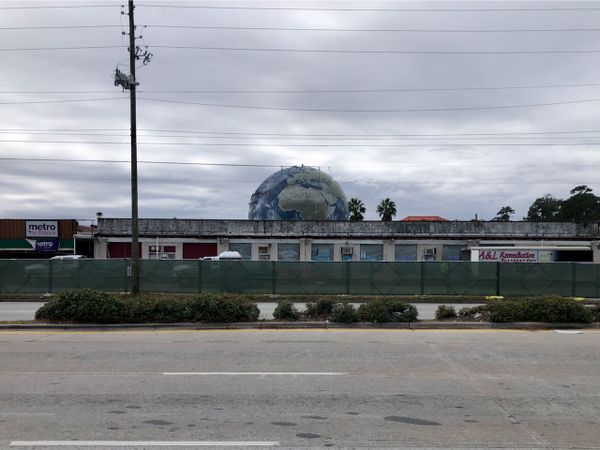