NOW, I don't think it's bragging to say that I was arguably the first person in local media to believe in the Savannah Bananas, when Jesse Cole created the team here in 2016.

I was featured in the first documentary about them, before their more recent ESPN fame. I've been interviewed by major media outlets such as the L.A. Times about the team's meteoric success.

I fell for them fast and I fell hard.

So the latest news about the Bananas -- that they've decided to play the field, so to speak, and see other cities -- hits me right in the heart.

From the start what I loved about the Bananas was the fact that someone was keeping baseball alive in Savannah after the departure of the flailing minor league Sand Gnats for Columbia, S.C.

I loved that someone was adding another chapter to our long and proud baseball history. I was thrilled that a team would continue to play ball in Grayson Stadium, one of the most unique and historic ballparks in this country and one of Savannah's true treasures.

Most of all, what I loved about the Bananas was that finally there was something for just us locals to enjoy.

In a town where nearly all the focus is on packing in tourists by the ton and bachelorette parties by the bushel, the Savannah Bananas represented the one thing residents could say was for our own enjoyment.

Affordable and casual, where you can feed the whole family without taking out a second mortgage. In a place well outside the Historic District, where you can see plenty of people you know and don't have to worry about a parking ticket or getting shot.

A team run by smart people who didn't get caught up in the usual City of Savannah politics. A team playing honest-to-God wood bat baseball on honest-to-God real grass.

The little feel-good gimmicks the Bananas used from the beginning -- such as players bringing a single red rose to little girls in the crowd between innings, and the elderly dancing team the Banana Nanas -- added plenty of wholesome, aw-shucks charm, but didn't take away from the actual baseball being played.

The love was real, people. And we guarded that love jealously. Maybe a bit too jealously.

So it's particularly hard to write this break-up letter now.

Savannah Bananas, you broke my heart.

This past Wednesday, the Bananas officially announced their departure from the college summer league they've played in since their inception.

From now on, they will only play exhibition "Banana Ball" games here at Grayson, and around the country. Mini-circuses that are time-limited to two hours, with new rules designed to eliminate as much actual baseball as possible to make room for more social media-friendly gimmicks.

Like the Harlem Globetrotters, the Bananas will have their own "designated foil" team, who I guess are supposed to lose every game to the Bananas as part of the show.

Maybe this was who you were all along, Savannah Bananas.

The thing that originally gave the Bananas some form of grassroots credibility in the beginning years -- and enabled them to legitimately be covered in the sports pages -- was the scrappy way they fought their way to the top of the Coastal Plains League as an actual team playing nine-inning ball under league rules.

Just a bunch of carefree college players enjoying their summers playing with wood bats, instead of those shitty and dangerous aluminum bats the NCAA makes them play with during the college season.

The players were housed by local host families who were happy to take them in, happy to brag to their friends here and around the country that they hosted a Savannah Banana.

That was part of the feel-good success story, part of the way the Bananas caught lightning in a bottle and became such a huge success here: They seemed real and they played for real, in a town where so much of what we see is no longer real.

If some of the between-innings gimmicks were cartoonish, there was always a tongue-in-cheek aspect, a raffish panache. A roguish little wink that said, sure I'm cute, but watch how far I hit this next pitch.

All that's gone now, essentially to be replaced with ESPN producers directing the made-up "action" and barely a token attempt to honor any of the actual rules of baseball -- probably the most rules-focused sport of all time.

It was all just an act, wasn't it?

Oh, we can't say we didn't long ago suspect you for being a playa, Savannah Bananas. Beginning with your expertly stage-managed, "controversial" choice of team name -- allegedly chosen by public vote with merchandise already designed -- we knew you were trouble when you walked in.

We knew you had a wandering eye when the two Coastal Plains League teams that Jesse Cole owns, the Bananas and the Gastonia Grizzlies, played each other in the league championship at Grayson Stadium. Cole, decked out as usual in his yellow tux, had to pretend to be rooting just for the Bananas in front of the home crowd, when actually he was a winner either way.

Then, Bananas, you found TikTok, and you began cheating on us on social media.

Isn't that always how it happens?

You discovered the thrill of a quick 30-second liaison, shared virally all over the country, instead of the more meaningful, long-term, intimate and local relationship Savannah had formed with you.

Or thought we had formed with you, Bananas. You never really loved us, did you?

As the national accolades flooded in -- with feature stories from the likes of NPR and the New York Times, written by dad-bod hipsters snickering about what all the baseball fuss is about in this weird Southern town -- us locals could barely get a ticket anymore.

Going to a Bananas game now is like scoring tix to the Final Four, or getting off the wait list after decades to finally be able to attend The Masters.

All for what started out as a scrappy team playing summer league ball in an old stadium that permanently smells like stale beer and spilled popcorn.

Now you're a star, Bananas. You've made it. And with stardom you've left behind your league and the heart of your high school sweetie: the city of Savannah itself who welcomed you in, who provided the all-important rhyme in your catchy name.

Oh, we'll still get to go to the occasional Bananas game at Grayson if we're lucky enough. If we hit the lottery. No doubt the corporate types will still get the hook-up for tickets.

Will the Bananas hit the City of Savannah up for a stadium upgrade? Club seats? Maybe even a new stadium? Will their old magic continue to work on us?

I'm sure we'll still root for our "home team," even if they eventually take their new touring Banana Ball team on the road for most games.

Bananas, we can't quit you.

We'll always have the sepia-toned memories of those bygone, carefree summers of 2016 and 2017, when our love was as fresh as the freshly mowed Grayson Stadium outfield before a game.

We'll always remember the genuine happiness and feelings of near-innocence you brought us as the outside world continued to turn to absolute shit.

Don't worry about us, Savannah Bananas. We'll be OK. Though our hearts are broken and betrayed, we'll be able to move on.

We hear there's a cute new team on the block. A hockey team called the Ghost Pirates. Yeah, it's a stupid name, but that's what they said about your name at first too.

And look how well that worked out for you.

The new team will play in a fancy new place that doesn't smell anything like stale beer or spilled popcorn. More like $15 Bud Lights and artisanal sushi nachos.

The Ghost Pirates will never be you, Savannah Bananas, and the Enmarket Arena will never be Grayson Stadium. Hockey is cold and baseball is hot.

But I guess we'll have to be OK with settling.

Thanks for the memories, Savannah Bananas. We'll always have a soft spot for you.

Just like the soft spot on an old, overripe banana.

It doesn’t matter if it’s .25 or $250—it’s the tiny act of building that habit, and stacking those investments over time 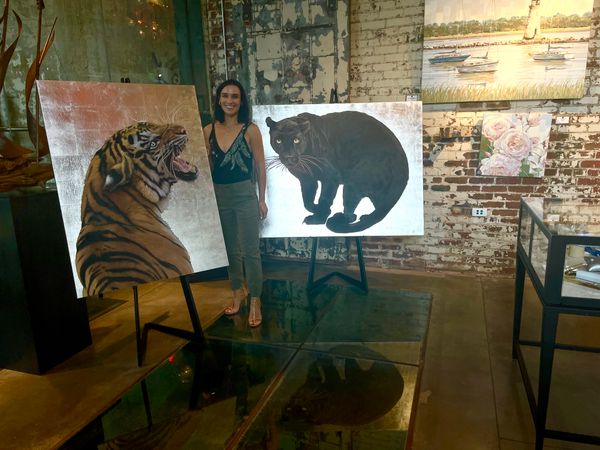 'I was accustomed to painting animals that are our pets. And this was an incredibly wild, bold, fierce, sexy, new kind of animal'