IS THERE a simpler way to share your personality than a sticker? Slap it on your bike, your laptop, your notebook, and it instantly tells the world more about you. Stick it on the back of a stop sign or on a lamp post, and it instantly conveys the message you’re trying to send.

Two Georgians have taken an eye to stickers to help convey their messages of progressivism and hope for the Peach State. And they’re both donating the proceeds to the New Georgia Project, an organization seeking to get more Georgians registered and civically engaged.

Austin L. Ray, an Atlanta-based writer, turned his attention towards flipping Gov. Brian Kemp’s seat in 2022 with a nod to Atlanta rap, "Move Kemp, Get Out the Way."

It’s a simple form of activism that’s really taken off, with stickers being sold all the way in Belgium and retweeted by famous folks. We spoke with both sticker producers about their ideas, their success and their future efforts.

Why did you decide that making the stickers was something you wanted to do?

Savannah, City Of: The original image went up on Instagram right after the election when Georgia flipped blue, and there was a huge outpouring of support from not just liberal Georgians, but folks nationwide. The idea of creating something tangible was really something suggested by a follower. When you have one person say, "I will buy this is you make it,” it's almost always representative of a larger group. But not being sure, we did this first run with a preorder, which worked out great—preorders covered 80% of our production costs and sales since then have covered the rest and then some!

Austin L. Ray: About a year ago, right as the pandemic was kicking off, a couple very talented friends and coworkers of mine, Lizzy Johnston and Linda McNeil, asked me to help them on a project. They felt helpless in the wake of COVID, but especially for all our friends working in the food and drink industry. Long story short, we made a zine called Eating Our Feelings, sold 500 copies, got written up in places like Bon Appetit, and raised $7,000 for the Giving Kitchen here in Atlanta.

That was a real eureka moment for me. I’ve always been happy to donate to things, protest, vote, the usual stuff. But I’d never been so closely involved in a fundraising project like that before. It was so inspiring. In the year since, I’ve worked with a number of other pals to raise more than $25K for various organizations, causes, and people down on their luck. It’s been super rewarding and humbling.

These stickers are the latest. It started with a Twitter poll with a few different slogans (the “Move, Kemp” one won by a landslide), and then I worked with my buddy David Sizemore on the design. (He’s a genius.) And then it was just a matter of getting them made and selling them.

Also, I’d be remiss if I didn’t say that Brian Kemp is a truly pathetic excuse for a governor, and his actions are embarrassing for the state of Georgia and beyond. My hope is that these stickers are a fun way to galvanize folks and get them thinking about how we’re gonna vote him out next year.

How did you choose the New Georgia Project to be the recipient?

SCO: This was kinda a no brainer. The work that the New Georgia Project has done getting voters registered and advocating for a better Georgia for everyone has definitely been integral in our recent elections. We just wanted to donate proceeds to an organization we saw doing great work so they can keep doing that work.

ALR: Back in September, I did a weeklong campaign for my birthday that raised $13K for Fair Fight. At the time, I felt like that was the best place to send money to make change in Georgia. But now that Fair Fight’s profile has become so large, it’s getting money from all over the world. New Georgia Project seemed like the logical next place to start funneling that cash. Of course, with big companies like Patagonia starting to donate to NGP now, maybe it’s gotten big enough that it’s time to move on to another. But I really like the work they do and the attitude they have while doing it, so that’s why I picked them for this one.

SCO: Honestly we've been extremely happy with the response. The preorders had plenty of people order 5 or 10 packs of them. Being radical is contagious. We've sold about 200 so far. While obviously most of the orders were right here in Savannah, we actually have gotten orders from as far away as Belgium!

ALR: Just bonkers. People have been so generous and down to help. A lot of people are sending additional money ($50, $100, $250) to be donated. Folks are tweeting photos of their stickers every day. Famous people who should rightly ignore me have instead been answering my DMs and spreading the word. It’s been really fun and exciting to watch. More than 400 people have ordered so far and we’ve donated $6,000 to New Georgia Project. I’ve only got maybe 350 stickers left, so I’m hoping we can end on a strong note.

Do you have plans to do this again in the future?

SCO: Oh yeah, this is kinda a regular thing for us, selling silly merch to raise money for causes we believe in. There's still about 300 stickers left from this first order, but we plan on doing stuff like offering free shipping weekends to see if we can get the rest of these out, so we can maximize our donation. 25% of the proceeds from every Radical Liberal Georgia sticker we sell will go to The New Georgia Project. We want to donate as much of other peoples money as we can!

ALR: Absolutely. After a big campaign like this, I tend to take a few months off and relax, remember what it’s like to use Twitter in a way that doesn’t involve constantly asking people for stuff, etc. At the very least, I’ll do another big campaign around my birthday in September. I’m not sure what the cause will be for that one yet, but I’ve got some time to think about. More than likely, though, something smaller will come up as it always does and I’ll help with that.

How do you feel after doing this line?

SCO: We're not sure how much of a difference decals ultimately make, but that's why we tied it directly to donations. Like, it's nice to have your voice heard, especially in a state that maybe didn't feel like you had a voice previously. Maybe someone will see that there's other people out there that feel the same way.  Maybe some folks will feel empowered to speak up when they feel their voice isn't being heard. Then again, maybe it's just a rad idea and we got lucky. Only time will tell. There's certainly been a lot of backlash from cry baby politicians who don't like losing elections, so much so that they passed laws making it harder for them to lose future elections. It's just kinda sad that politicians seem more concerned with their political careers than the wishes of the people they represent. Also, it's hilarious to us that a skater term like "radical" would be used to decry a movement. Get radical Georgians, you've earned it!

ALR: I think it all goes back to wanting to not feel helpless. It can be really hard watching a racist monster in power enact shitty laws and tell obvious lies to the public. The way I look at it is I can either sit at home and complain about people like Kemp, or I can find fun ways to raise awareness and money. Doing this helps me sleep at night and hopefully makes other people feel good as well.

To get a Savannah, City Of sticker, visit their Etsy shop of the same name.  To get five of Ray's stickers, Venmo $10 to @austinlouisray and include your mailing address in the description. 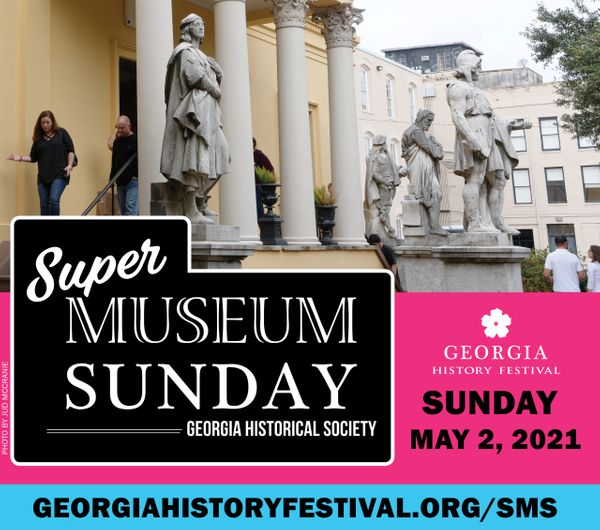 How much has Forsyth Park changed over the years? Ask this statue of Mercury, which once stood among pine trees in the park.